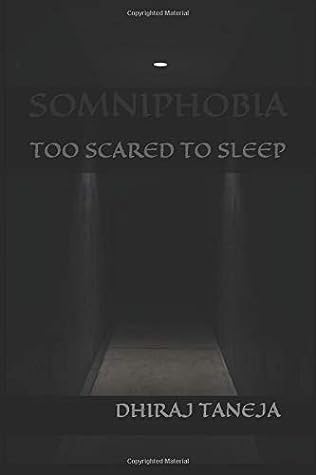 Have you ever thought that you might go to bed and never wake up? Though it seems morbid and unlikely, this idea often dominates the minds of those with Somniphobia.

Twenty-seven-year-old Riyan lives with his working-class family. The story is set in Bangalore, India. The story revolves around a boy who is afraid of sleeping. Riyan visited several doctors and physiotherapists but nothing helped him. He even visited a psych-ward because he was suffering from some serious mental depression. The story is all about his fight with his fear and life afterwards.

This is a brief story, and it’s interesting that it’s based on a paranormal thriller. Here our main protagonist Riyan struggled through sominophobia which is sleep deprivation after his father’s death.

No one can solve his problem, even a specialist. It’s a story about overcoming fear. There’s some problem with narration. Sometime I can’t get into a story and it’s character.

hello ! I m a major lover of book and my pass time is too read books . I love to cook also . and this blog is my first book blog and I will be posting soon.. ☺ View more posts